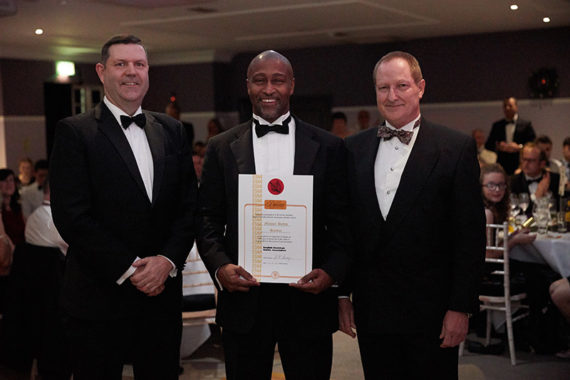 Micheal was awarded his Sandan at this years ESKA award ceremony. Well done.

Congratulations to Michael for achieving Sandan! 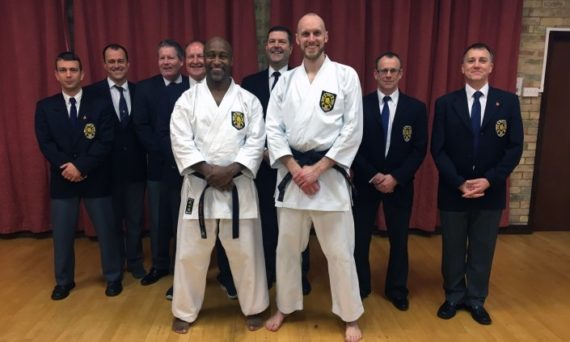 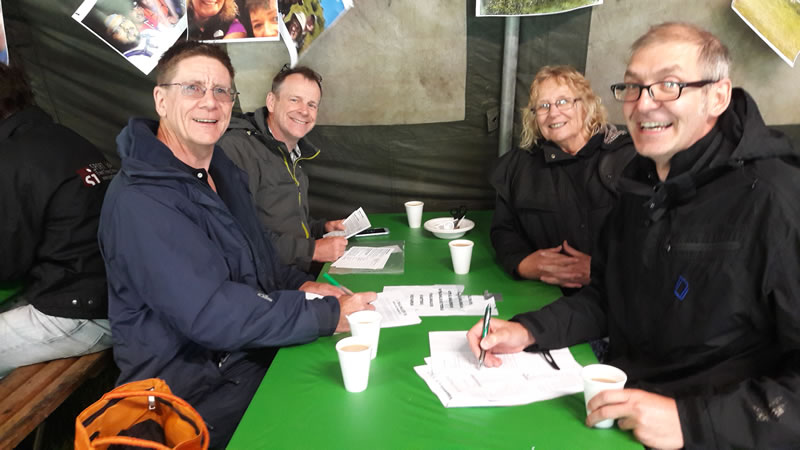 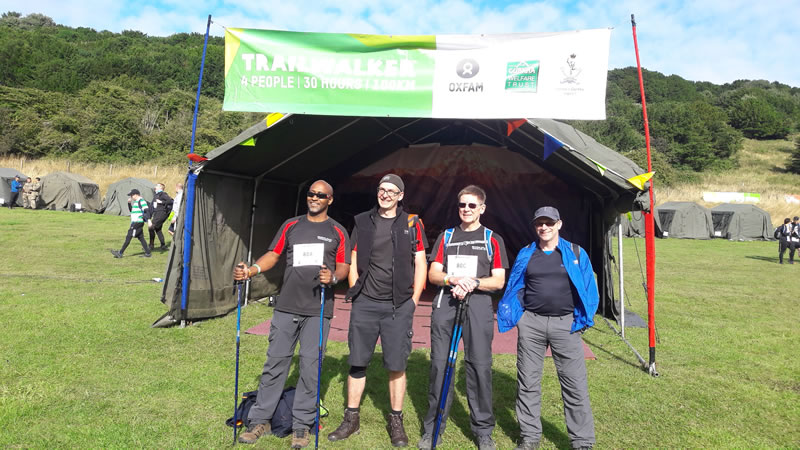 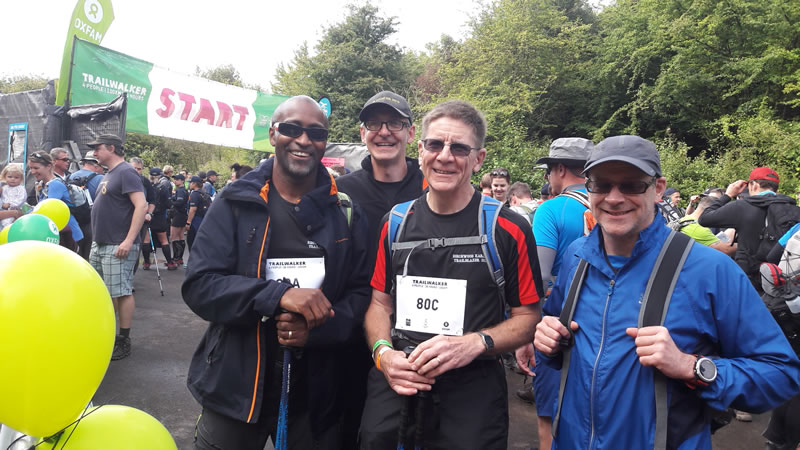 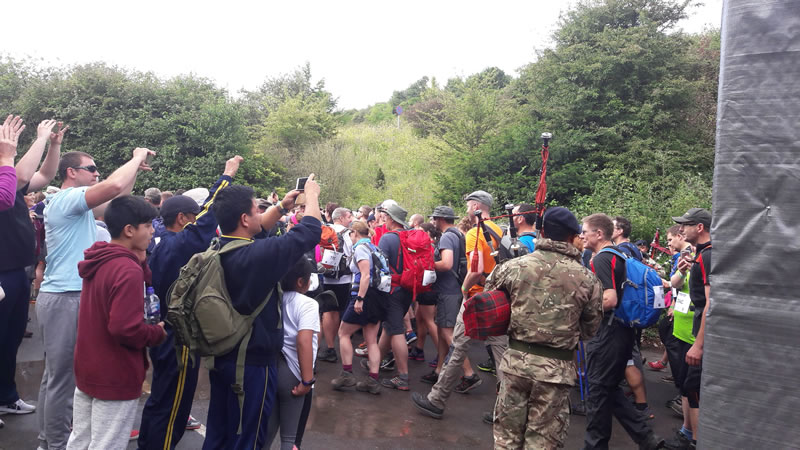 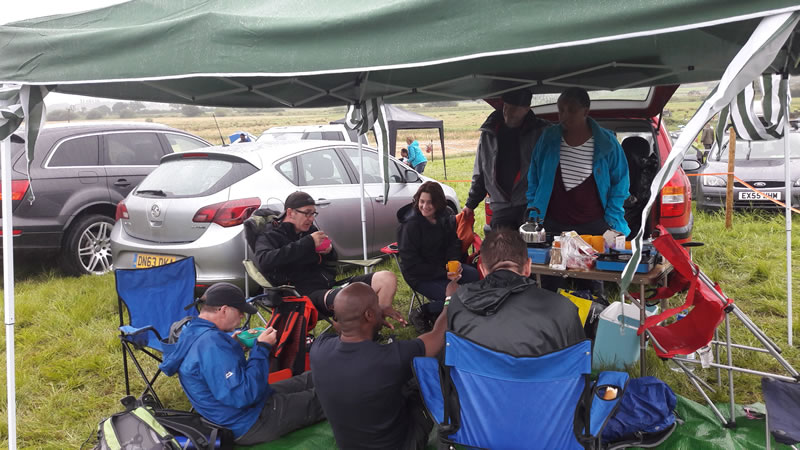 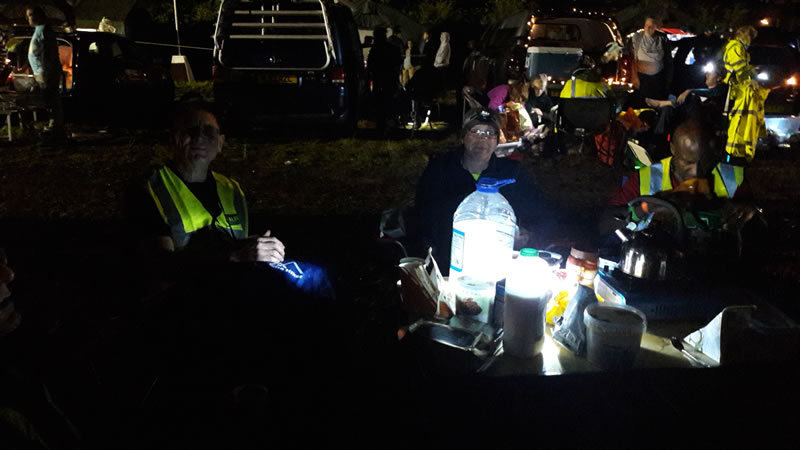 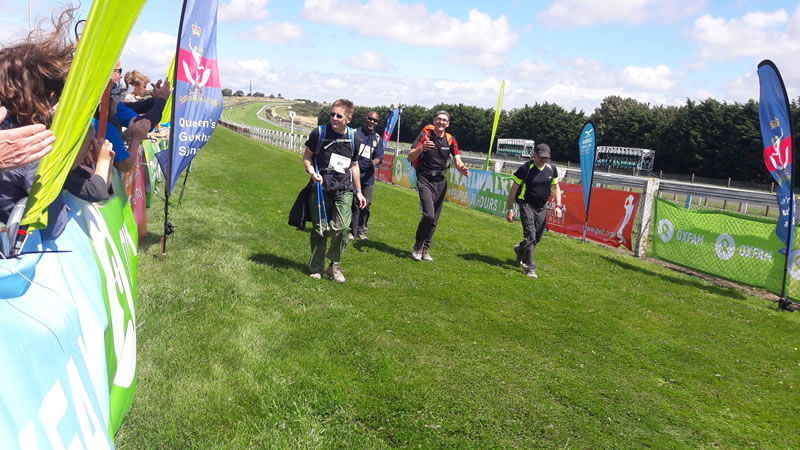 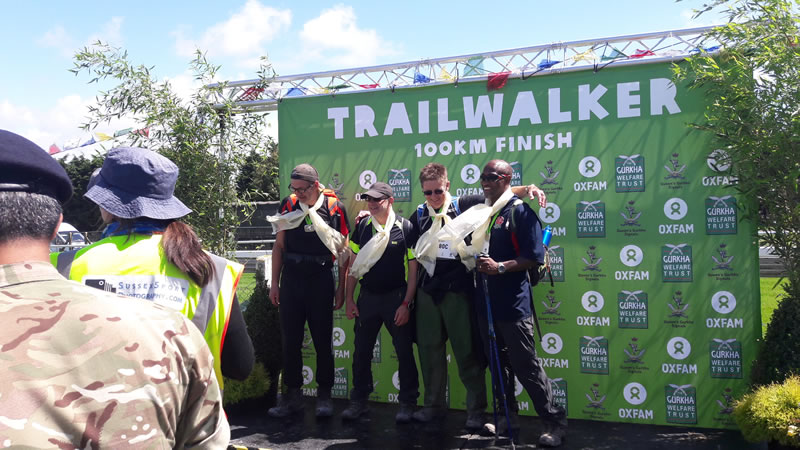 Over the weekend 29-30th of July 2017 four intrepid members of the Birchwood club completed a 100Km march across the South Downs in just under 28 hours. They were backed up by a team of 5 support crew, also members of the club or long suffering wives.

This event is known as the “Gurkha Challenge” as it is run annually by the Gurkha Regiment (backed by Oxfam UK). The challenge is for teams of 4 people to complete a 100Km hike across the South Downs in 30 hours or less. It was originally designed as a stamina test for the Gurkha’s themselves but has been open to the public for a number of years now.

What was the support team for you might ask? Well, their job was to meet the walking team at the many check points to supply them with food, drink and anything else they might need. Our guys were magnificent, they brought camping stoves to heat soup and boil water for tea. They had sausages rolls sandwiches, chocolate bars, energy drinks, the lot. Ian even bought a gazeebo for us to sit under out of the rain! They shared our pain, like us they stayed up all night, so that they could be at the night stage check points. They braved the wet country lanes in the dark, while navigating between muddy fields (i.e. Check Points).  Without them the walking team would not have made it.

The “South Downs Way” actually has quite a lot of “ups” as well as “downs”. In fact we regularly reach peaks of over 700ft, with the highest point being about 1000ft. We seemed to be always climbing up onto a plateau only to descend again, back down to sea level a few miles further on.

The route is broken down into 10 stages. Each stage is about 10k long (although it does vary quite a bit). At the end of each stage there is a Check Point where every team member has to check in with the Gurkhas (in case someone gets abandoned). These check points are usually a farmers field next to a country road, where the support crew can drive in and set up a temporary camp for the walkers to pit stop for food and drink.  Check points do get very muddy when it rains, making driving in and out quite challenging.

You know when you do a half marathon, tough mud, or something that tests you a bit. At the time it hurts, but a few days later you think: “that wasn’t so bad, I could do that again”. Well it’s been 3 weeks now and I’m not there yet, I still wouldn’t do it again.

It’s just so long, hours of pain and misery. You start hurting after 5 or 6 hours and it gets progressively worse as the hours drag by. It’s not just the feet, it’s legs, hips, knees, even my back hurt. This can’t be good for you, I’m sure that I’ve worn ten years out of my joints.

Of course, the rain didn’t help. We started at 9am and by about noon it was raining and it continued to rain until daylight the next morning. It was proper rain too, not that namby-pamby stuff you get most days, this was heavy. It rained straight down, it rained in our faces, sometimes it even rained horizontally. We were soaked through, even our underclothes were wet. And all this rain turned the path into deep mud, making every step harder. Descending in the dark became that little bit more risky, there was a lot of slipping.

The first couple of stages were actually quite nice. The sun was out, so we could take in the scenery and enjoy the country. But when the clouds descended, the rain came and our view disappeared. All we could see was the muddy path in front of us.

As the day wore on the crowds of walkers began to thin out (we had staged starts with a 200ish walkers in each batch). We started passing a few groups and the odd straggler, struggling with the slopes. We saw one girl sitting just off the path surrounded by her team mates and cover with in a space blanket, she had obviously had enough. Michael did the gentlemanly thing and enquired after her health, the rest of us stormed passed thinking: “great, another one bites the dust……………….”

As things got tougher, Dean kept us going with his never ending supply of jokes (do you remember the sort of jokes that used to amuse you when you were 10, well imagine listening to them nonstop for 28 hours…… ).

Michael, Andrew and myself had practised by carrying out many long walks over the previous months, so we were ready. But Dean had stepped in at the last minute as a substitute for Ian (serious knee trouble), so he had no time to practice. No-one expected him to finish (some unkind people were even trying to take bets on when he’d crash out), but he surprised everyone and probably finished the strongest of us all!

As we arrived at the last checkpoint before dark, the rain stopped! Great, we thought and changed into our nice dry spare clothes (supplied by the support team). We started to feel better, there was an air of a quiet optimism about. We could do this…………. And then, even before we had left the checkpoint, it started again……….RAIN MORE RAIN! Even worse than before. This time it was coming in sideways, drenching us head to foot in minutes………..great.

The night stages were the worst. We’d been walking all day, we were soaked, tired, low on energy, hurting and it was pitch black. By about 3am we were probably at our lowest ebb: the “Terminator” (Andrew) was beginning to show signs of rust and even Dean was feeling it (I think his “Duracell’s” were running low). Michael and I were no better off, it was a real struggle just to put one foot in front of the other.

Then we saw the lights of the next Check Point ahead, just over the hill and our spirits lifted. There was our salvation: a hot cup of tea, some warm soup and a sit down in the dry. Knowing that our support team was there waiting for us…..That‘s what kept us going.

When dawn broke and the rain, at last, stopped our spirits lifted again. We met the support crew for the last time for a smashing breakfast of bacon rolls and sweet tea. Then on for the final slog onto Brighton race track and the finish line. We passed several teams and stragglers on this final stage. All were making painfully slow progress, limping badly, or shuffling along with blistered feet. Suddenly we became competitive, every “cripple” we passed was another position up, the pace quickened. Dean and I resisted the temptation to ashi-barai stragglers as we approached (well they could have pulled out a spurt of speed at the last minute and overtaken us again!) and we continued on to the finish where the support crew and the entire Hawley clan were waiting to cheers us over the finish line.

We won’t forget this one in a hurry!

Position: 246th out of 374 teams,  many of the finishing teams were military. The fastest was a Gurkha team who finished in 10 hours 51 min (they ran all the way!).

The extra 4 miles distance can be accounted for: walking from car to register tent, then to start and walking around in check points.

458 floors up and 438 down is equivalent to walking up and down the stair ll of the world’s tallest skyscraper two and a half times.

Climbing and descending Ben Nevis as part of a 62-mile hike.

To celebrate Sensei Nursey’s 9th dan, all the black belts of all grades joined together for a joint photo. This was taken at the December grading.

This awards ceremony saw the presentation of:

Emily Allen and Richard Ayres both passed their Black Belt grading on the 19th of May 2012. This was a particularly grueling test lasting nearly 5 hours, with two sold hours of hard basics. Both Emily and Richard acquitted themselves well and always looked like passing.

Emily started Karate as a junior with her young brother and sister about 5 years ago. She has never failed a grading and so is one of the very few to achieve full Black Belt in only 5 years when starting as a junior. Kata is Emily’s forte at the moment because she has such excellent technique, however her kumite shows a lot of promise and I have high hopes for it in the future.

Richard is one of the great stalwarts of the club, always at the big events and always willing to help out. He too started his martial arts career at an early age, gave up, then rediscovered it in later life. He has battled with a long standing knee problem for years which has continually held him back, but his determination and personal courage have seen him through and at long last he is a Black Belt!

Jean first started training in Karate when she was a teenager back in Irvin Scotland, but had to give it up when she moved to Hatfield and started a family. Several years later she took her two kids along to a demonstration at Birchwood Karate Club, after which she signed all three of them up for lessons. Many years later the kids have long since given up, but Jean is still there and now she has achieved one of her life ambitions… to be a Black Belt!

Jenny is renowned for her dynamic kicks, speed of movement and tenacious fighting style. She comes from a family of Karate Ka; her brother Robby was one of the very first Birchwood Black Belts and her mother Paula (a full 1st kyu) is the club secretary. At last years ESKA Championships Jenny came 2nd in both Kata and Kumite for the ladies senior events.

Here is a picture of Jenny Nutter (on the left) and Jean Reader (on the right) immediately after passing their Black Belt grading. Sara Rand is the girl in the front and one of my kata squad.